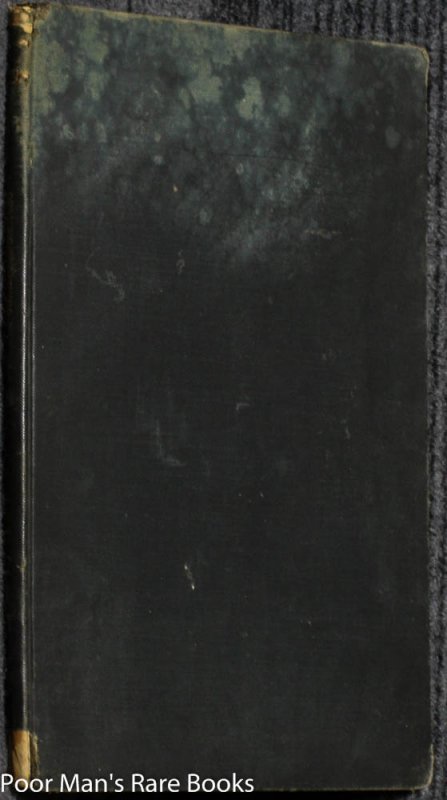 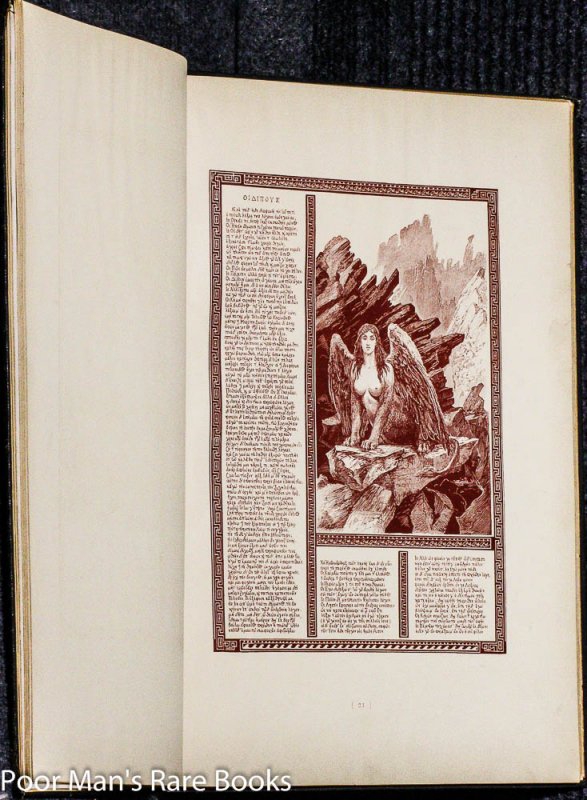 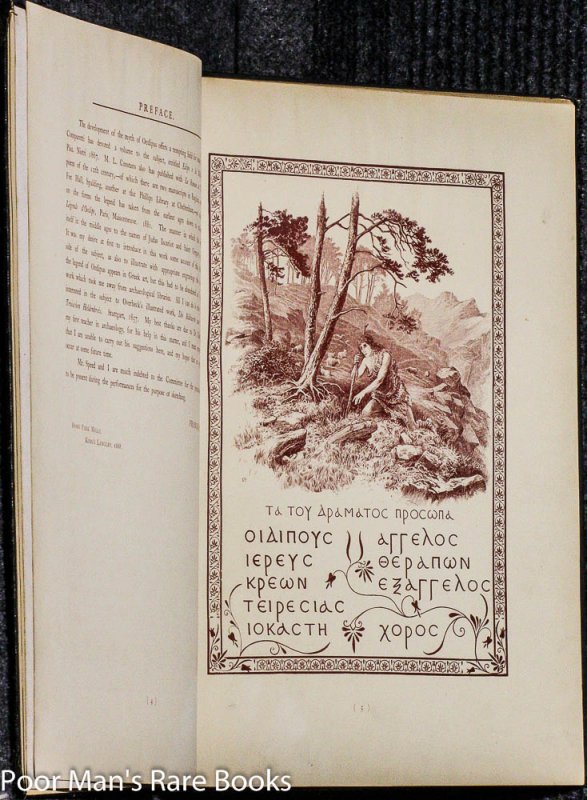 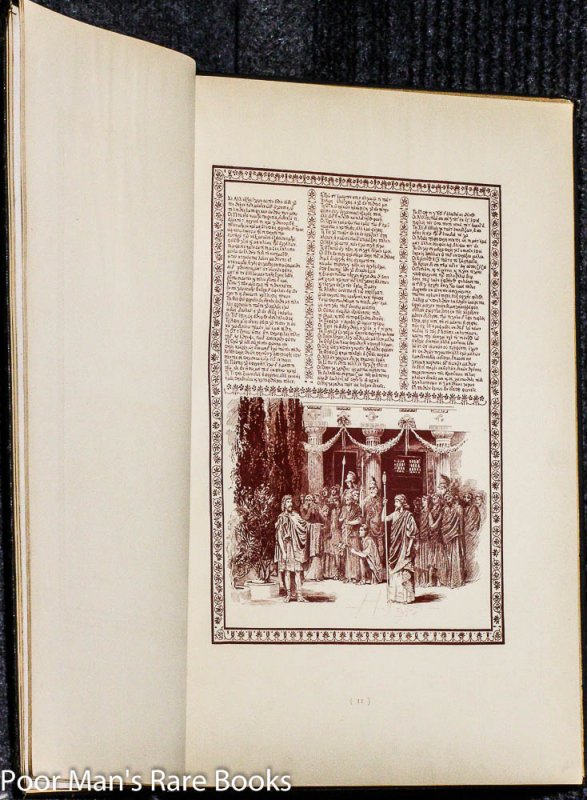 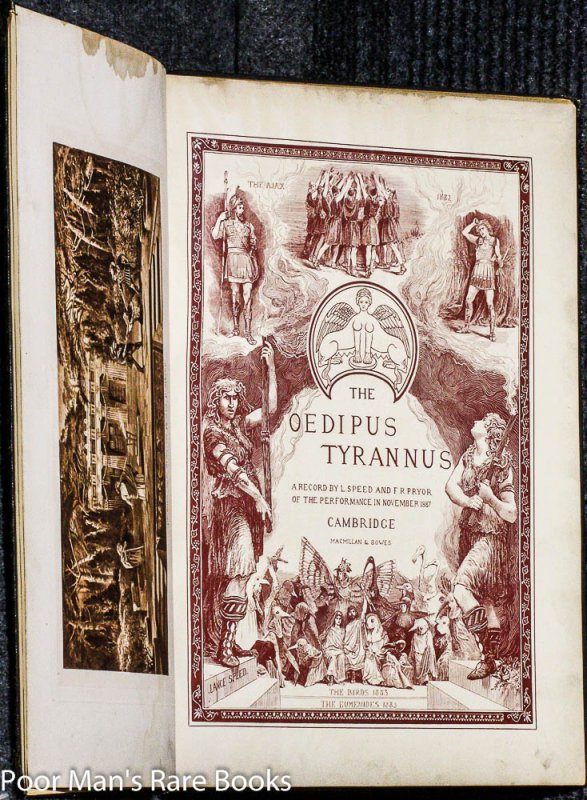 THE OEDIPUS TYRANNUS: A RECORD BY L. SPEED AND F. R. PRYOR OF THE PERFORMANCE IN NOVEMBER 1887

Mono-color engravings; 63 pages; The Oedipus Tyrannus: A Record by L. Speed and F. R. Pryor of the Performance in November 1887Author: Francis R. Pryor, Lancelot Speed, Sophocles - Sophocles is one of three ancient Greek tragedians whose plays have survived. His first plays were written later than those of Aeschylus, and earlier than or contemporary with those of Euripides. According to the Suda, a 10th-century encyclopedia, Sophocles wrote 123 plays during the course of his life, but only seven have survived in a complete form: Ajax, Antigone, The Women of Trachis, Oedipus the King, Electra, Philoctetes and Oedipus at Colonus. For almost 50 years, Sophocles was the most-feted playwright in the dramatic competitions of the city-state of Athens that took place during the religious festivals of the Lenaea and the Dionysia. He competed in around 30 competitions, won perhaps 24, and was never judged lower than second place. Aeschylus won 14 competitions, and was sometimes defeated by Sophocles, while Euripides won only 4 competitions. The most famous tragedies of Sophocles feature Oedipus and also Antigone: they are generally known as the Theban plays, although each play was actually a part of a different tetralogy, the other members of which are now lost. Sophocles influenced the development of the drama, most importantly by adding a third actor, thereby reducing the importance of the chorus in the presentation of the plot. He also developed his characters to a greater extent than earlier playwrights such as Aeschylus. Width: 11.5" Height: 15". Book Details: "It had long been my wish to produce some permanent record of a Cambridge Greek Play, but I could not decide in what form it should appear until my friend Mr. Speed offered to come to my aid and prepare drawings. After much thought we agreed that the book should take its present shape, and give to the world what we may claim to be the first illustrated edition of any Greek play." (First lines of Francis R. Pryor's preface) Condition / Notes: bound in black cloth with stamped gilt lettering to the spine. The book shows external wear, with tears and loss of material at the top/bottom of spine. The covers display soiling, particularly noticeable at the top edge of the front cover. Loss of material is also visible at the outside corners of the boards. The binding is sound. The top edge of the frontispiece displays staining, with annotations to the verso. The name J. Conrad Hutchinson appears in red ink at the top of the first page of the preface. The pages are otherwise clean, with occasional mild rippling. This work is illustrated with a frontispiece engraving, and vignettes to the title page and the text. The text is in Greek; the description of the performance is in English. Title page dated 1883 and 1885 but introduction dated 1888. Many somewhat bizarre engravings.

Title: THE OEDIPUS TYRANNUS: A RECORD BY L. SPEED AND F. R. PRYOR OF THE PERFORMANCE IN NOVEMBER 1887 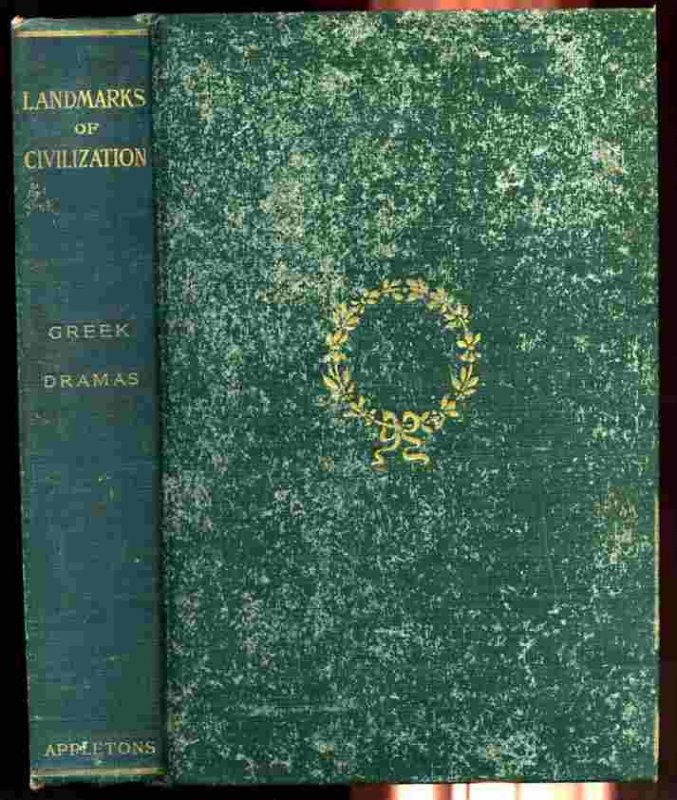 By: with Biographical Notes and The Critical Introduction by Bernadotte Paerrin 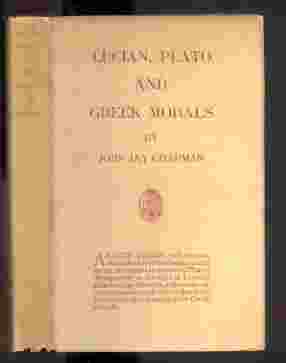 THE OEDIPUS TYRANNUS: A RECORD BY L. SPEED AND F. R. PRYOR OF THE PERFORMANCE IN NOVEMBER 1887