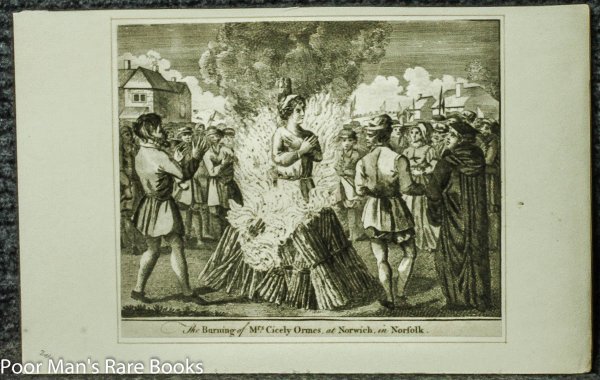 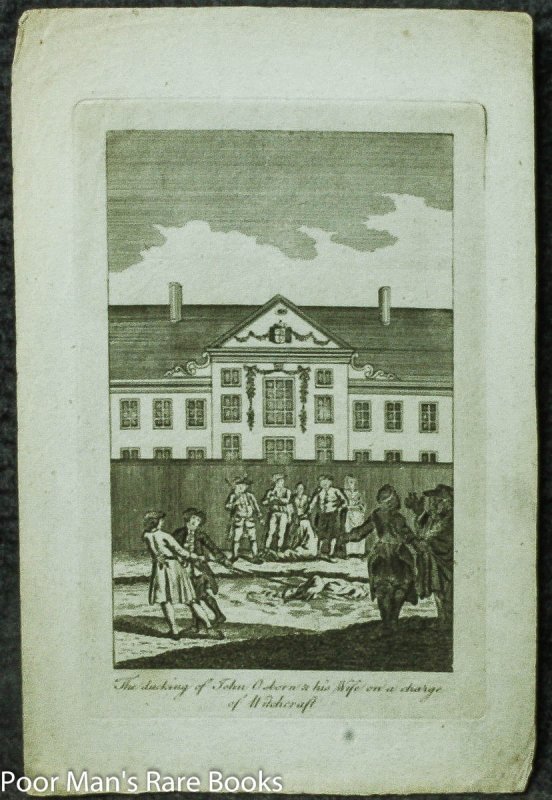 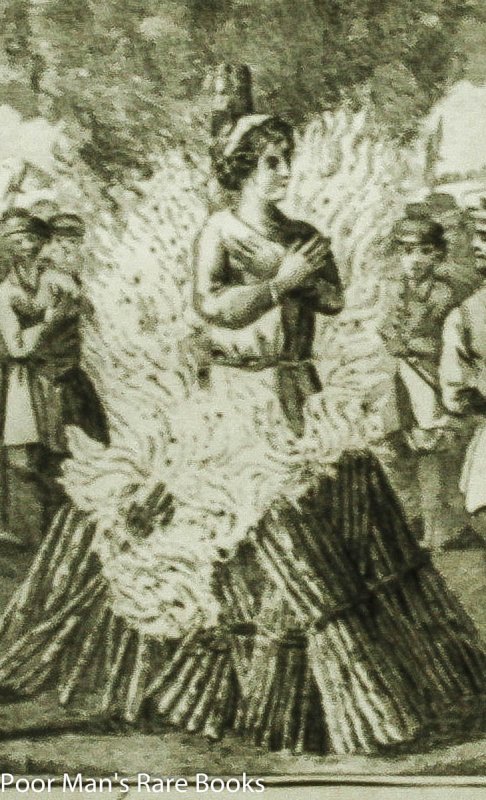 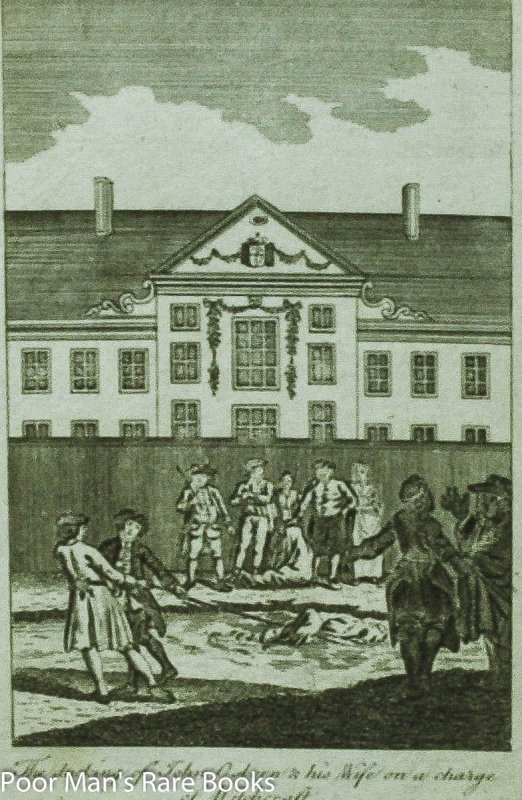 Engraving; Two plates: 10.25 x 6.5" [illustration 5.75" x 7"] on light card "THE BURNING OF MRS CICELY ORMES [said to have been a Christian Martyr] AT NORWICH, IN NORFOLK". "Cicely Ormes, of the city of Norwich, wife of Edmund Ormes, was arrested on the day that Simon Miller and Elizabeth Cooper were executed. She drew the attention of the officers to herself by speaking encouraging words to the two prisoners, on their way to the stake. For this she was put in prison and soon after taken before the chancellor for examination. The chancellor offered to release Cicely Ormes, "if she would go to church and keep her beliefs to herself," and told her "she could hold to any faith she would." But she answered, "I will not enter your church." Then the chancellor told her he had shown more favor to her than he ever did to any person, and that he was loath to condemn her, considering she was only a foolish young woman." Upon this she told him, if he thought so, he should not be so anxious about her belief; and said that, foolish or not, she was content to give up her life in so good a cause. The chancellor then red the sentence of condemnation, and delivered Circely Ormes to the care of the sheriffs of the city, who immediately carried her to the Guildhall at Norwich, where she remained until the day she was led to the stake. Cicely Ormes was a young woman in the prime of life, uneducated but very earnest in the cause. She was born in East Dereham, and was the daughter of Thomas Haund, a tailor. The first time she was brought before the magistrate she recanted, but was afterward so troubled in conscience that he wrote a letter to the chancellor, to let him know that she repented her action from the bottom of her heart, and would never do the like again while she lived. But before she could succeed in having it delivered, she was token, tried, and condemned, as previously told. Circely Ormes was burned the 23rd of September, 1557, between seven and eight in the morning, the two sheriffs were there, and about two hundred people. When she came to the stake, she kneeled down and made her prayers to God; that being done, she rose up and said, "Good people, I believe as I have been taught from the Bible. This I do, nor will I ever change from it. This my death is a witness of my faith to all here present. Good people, as many of you as believe the same as I believe, pray for me." When Cicely Ormes had said this, she laid her hand on the stake, and seeing her hand blackened (for she was burned at the same stake Simon Miller and Elizabeth Cooper had been) , she wiped it on her dress. After she had been bound, and the sheriff's men had kindled the fire, she clasped her hands together against her breast, turning her face upward, and so stood raising up her hands little by little, till they fell helpless at her side--when she yielded up her life as quietly as if she had been in slumber, and seemed to feel no pain." Quote from unknown source. THE DUCKING OF JOHN OSBORNE AND HIS WIFE ON A CHARGE OF WITCHCRAFT. Later reprinted in the Hertfordshire Countryside, this is probably a mid 17th century printing on paper with a confused tile. 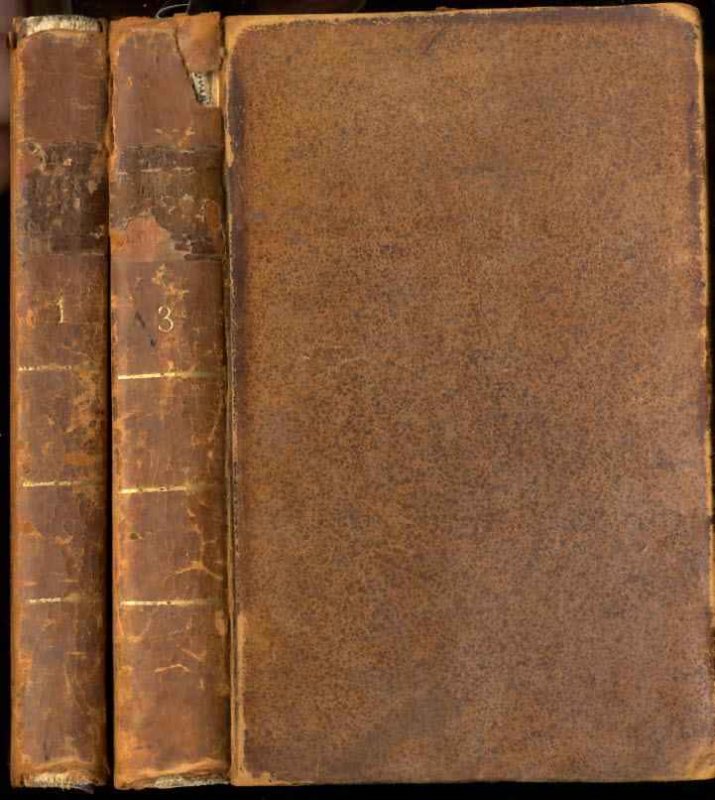 THE LIFE OF EDWARD EARL OF CLARENDON, LORD HIGH CHANCELLOR OF ENGLAND AND CHANCELLOR OF THE UNIVERSITY OF OXFORD [VOLS I AND III]

By: Edward Earl Of Clarendon 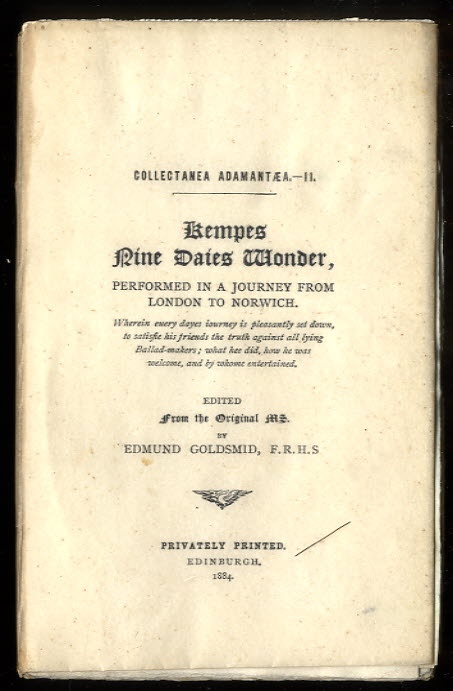 KEMPES NINE DAIES WONDER, PERFORMED IN A JOURNEY FROM LONDON TO NORWICH: WHEREIN EVERY DAYS JOURNEY IS PLEASANTLY SET DOWN

By: edited by Edmund Goldsmid 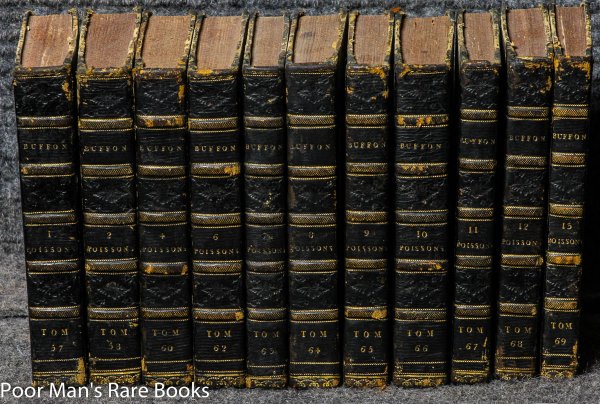 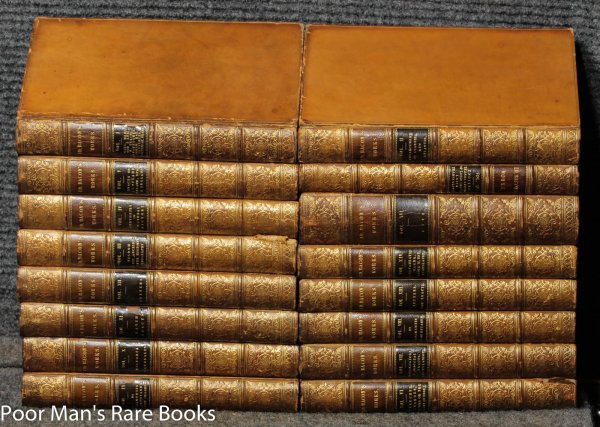 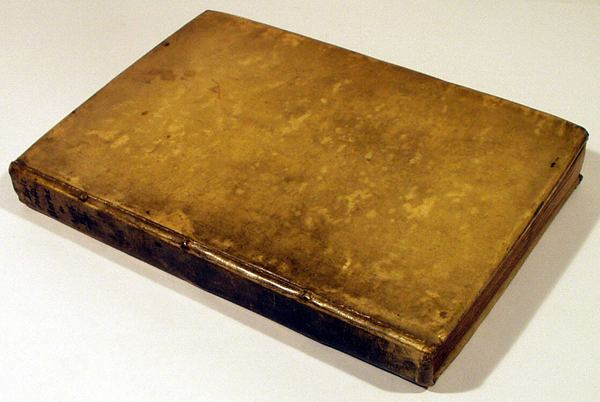 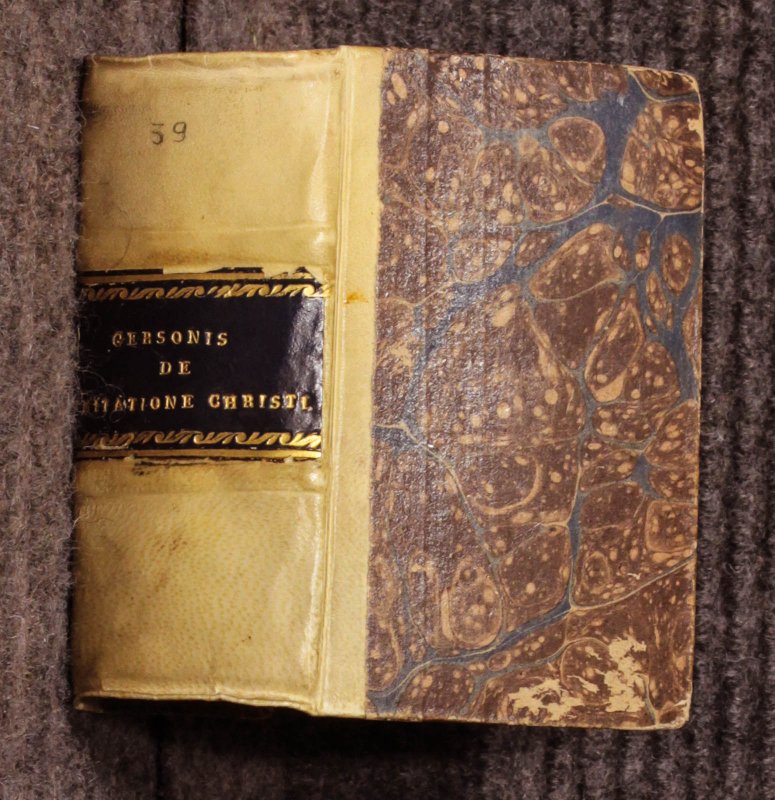 By: John Gerson / Thomas A Kempis. 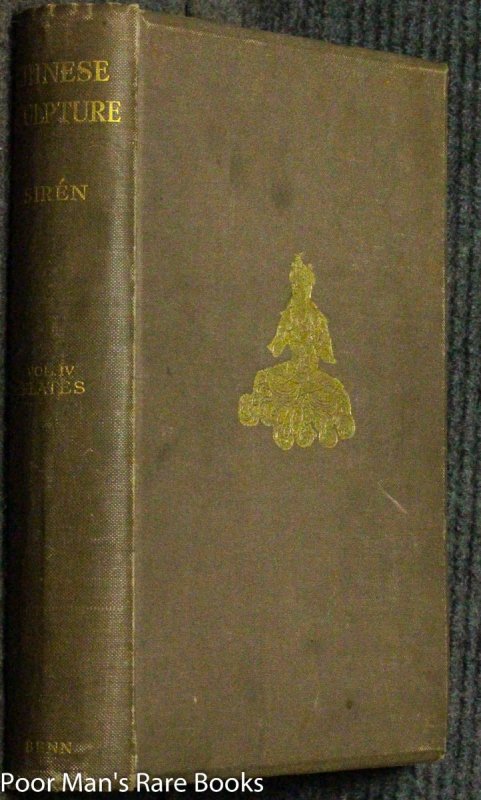 Chinese Sculpture From The Fifth To The Fourteenth Century. Volume IV With Plates 422-623 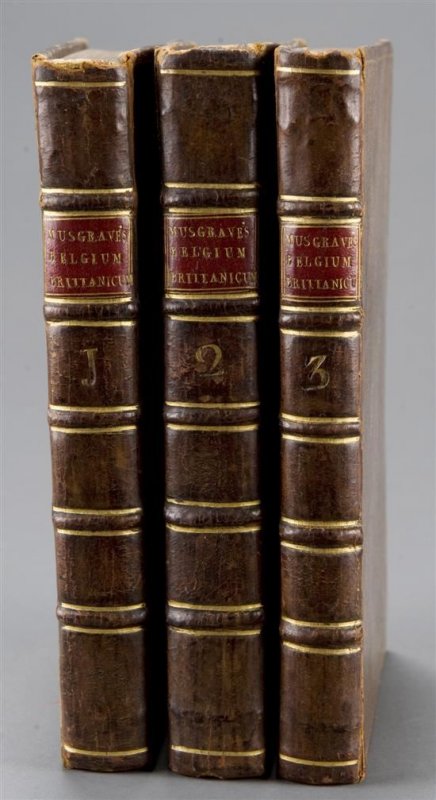 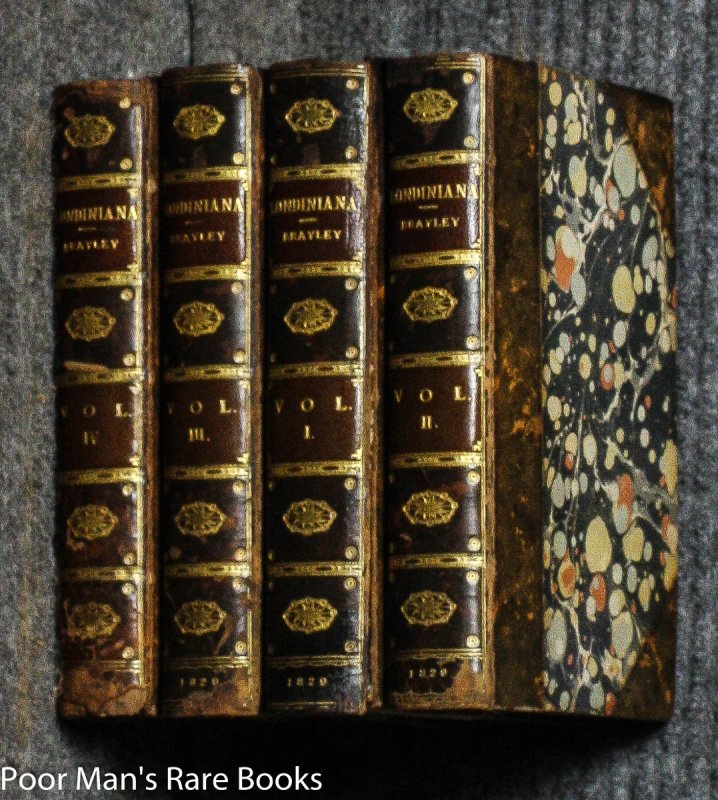 LONDINIANA; OR REMINISCENCES OF THE BRITISH METROPOLIS: INCLUDING CHARACTERISTIC SKETCHES, ANTIQUARIAN, TOPOGRAPHICAL, DESCRIPTIVE, AND LITERARY. 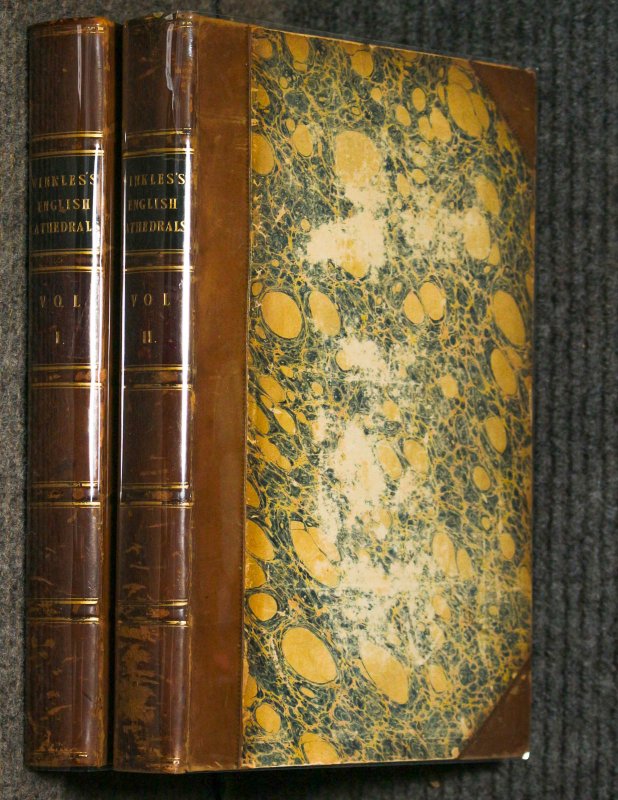 Winkles's Architectural And Picturesque Illustrations Of The Cathedral Churches Of England And Wales [ 2 Vol, 128 Plates